It is often inseparable from gaming headsets to e-ports. Especially, for shooting competitive games, the clear sound of footsteps, leaves can be a good weapon for you to judge the enemy’s precise position. According to the situation know when I hide, when I chase, when I hide.  The advantage of gaming headsets will highlight.

You handle a high-performance gaming headset that brings an immersive experience but also accurately sound position.

Early gaming headsets originated from the communication headsets into the gaming field. The offline game environment was noisy. Gamers needed to focus without mistakes.

However, communication headsets are expensive. Most players do not play offline games. Cost-effective gaming headsets have become the focus of manufacturers.

As e-ports appeared, many players used HiFi headsets or even ordinary headsets to play games at first. They didn’t know what kind of experience enhancement gaming headsets brought.

With the rise of the e-sports industry, Gaming headsets are beginning to be valued by players. A variety of new gaming headsets suitable for mobile games or PC have appeared.

The difference between physical channels and virtual channels

Currently, on the market, there is a two-channel system for gaming headsets: physical and virtual.

The physical channel is means equipped with multiple speaker units in the headset. That emits sound through the speakers at a different to identify the source of the sound direction.

Early gaming headsets used a 5.1-channel architecture (front left, front right, rear left, rear right, and voice of center) based on the physical drive of the speaker unit. Upgrade to a 7.1-channel system based on 5.1 (new center-left, Center right).

The physical 7.1-channel system has a strong stereo sound and can create a more realistic game sound. It usually needs to be used with a sound card, so it is expensive.

Virtual 7.1-channel headsets are cost-effective to simulate a physical 7.1-channel sound experience. Meanwhile, weight reduced. It will not feel oppressive or uncomfortable if you wear it for a long time. Therefore, many gamers favor it.

For FPS games, the 7.1-channel headset is essential to plays a critical role in capture sound and accuracy points.

The difference between a gaming headset and music headphone

You can learn more about it by reading this blog.

Are Gaming Headsets Worth it?

Now latest gaming headsets have a USB interface, plug-and-play, built-in sound card, and microphone, and the default EQ has adjusted for games. That gaming headsets are the “game console” in the headset industry.

For players, who often play FPS and TPS competitive games, a high-performance gaming headset is necessary.

Therefore, for players, the importance and role of gaming headsets are no less than keyboard, mouse, and monitor.

Can music headphones instead of gaming headsets?

You can learn more about it by reading this blog.

Is there any precise positioning from sound?

After a multi-sample actual test by professional players, an objective and affirmative answer give.

Gaming headsets have a better grasp of the omnidirectional sound positioning distance of FPS games, while music headsets have dead ends, which make it difficult to express the range of sound in FPS games.

In terms of the listening position, gaming headsets can accurately grasp the sound distance than music headsets. As long as you are an FPS player pursuing a hardcore, a high-quality gaming headset is indispensable.

As an ordinary gamer, the purchase of gaming headsets must base on their actual needs. Before purchasing, you need to clarify a few questions:

To know about the parameter configuration before purchasing gaming headsets so that you can choose a suitable headset.

Most of the time and most people play the games, not a short time. Therefore, it is principal that the headset not only works well but that you also wear it comfortably for a long time. Keep an eye out for headsets that have breathable or leather cups, which are kinder on the ears, as well as cushioned headbands. Plus, if you wear glasses, some headsets are designed to be ergonomically friendly to you.

B, Decide the Most Suitable Platform

The most common gaming platforms include Playstation 4, Mac, Windows PC, Xbox One, and Nintendo Switch.

Typically, headphones that feature 3.5mm and USB connections are compatible with many platforms. They should work seamlessly across all these platforms.

Please note that consoles do not always support all functions because this software is dependent. Virtual surround sound is the most common example of this.

An open design means that the ear is not completely closed. In some cases this improves acoustics and is finer during gaming in warmer weather.  It is breathable when playing in the summer. But if leak sound, it is easy for you to impact from outside world.

shut yourself off from the outside world for maximum concentration and immersion. In warm weather or intense play sessions, you may feel clammy if wearing a long time.

At present, game headsets are equipped with 50mm speaker units, the smaller ones are 40mm, and the larger ones are 60mm on the market.

It means the sound system can reproduce within the allowable range of the sound amplitude. It measures the uniform reproduction ability of the earphone to the high, medium, and low-frequency band signals.

On the market, it is 20Hz-20KHz. The sound wave range that the human ear can hear theoretically.

Generally speaking, the lower limit of the frequency response and the higher the upper limit. It indicates that the resolution of the headset is wide. The sound quality performance details are richer.

It means the sound pressure level that the earphone can emit when 1mW of power is input. Generally speaking, the higher sensitivity and the lower impedance, the easier the earphone will produce sound.

That means the obstructive effect of alternating current in the circuit. Generally, the lower the impedance, the easier the earphones will produce sound. The sound performance will be smoother.

Impedance is a dynamically changing parameter value. For headphones, if a low-pitched sound effect is required, the greater the impedance.

At present, on the market, the impedance of gaming headsets is generally around 32Ω. It can meet the voice needs of game players.

Support virtual 7.1 channel, built-in high-fidelity 50mm speaker unit, clear and transparent sound quality, stable output, high sensitivity, with an independent sound cavity design, you felt as if really in games with high-performance gaming headsets. Accurately Capture the sound positioning during games, the body is lightweight, and the earmuffs are comfortable to wear and close to the ear..

In addition to the above requirements to consider, there are considerations of their own budget!
Everything you buy should be combined with your own budget to make a decision!
Not necessarily expensive is the best, suitable for yourself is the most important! 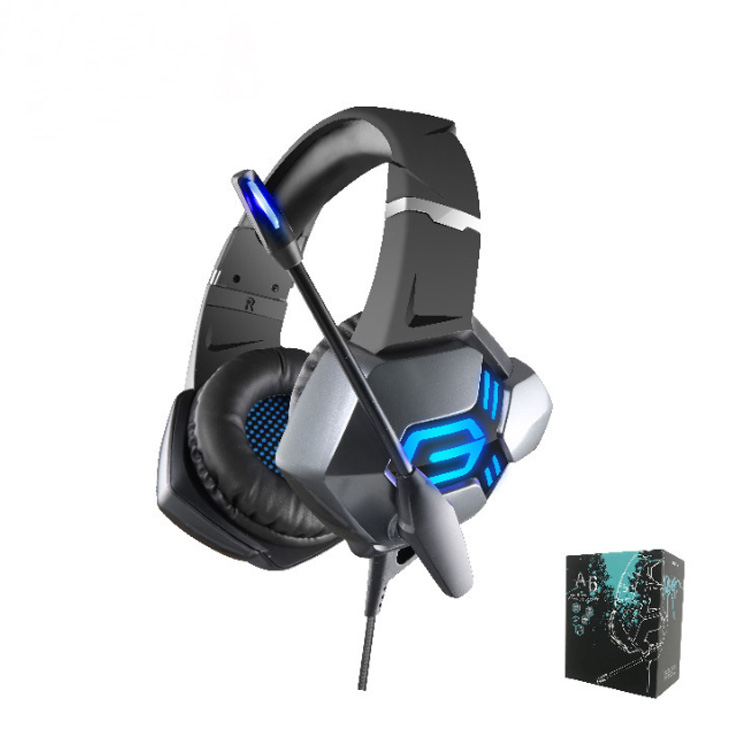 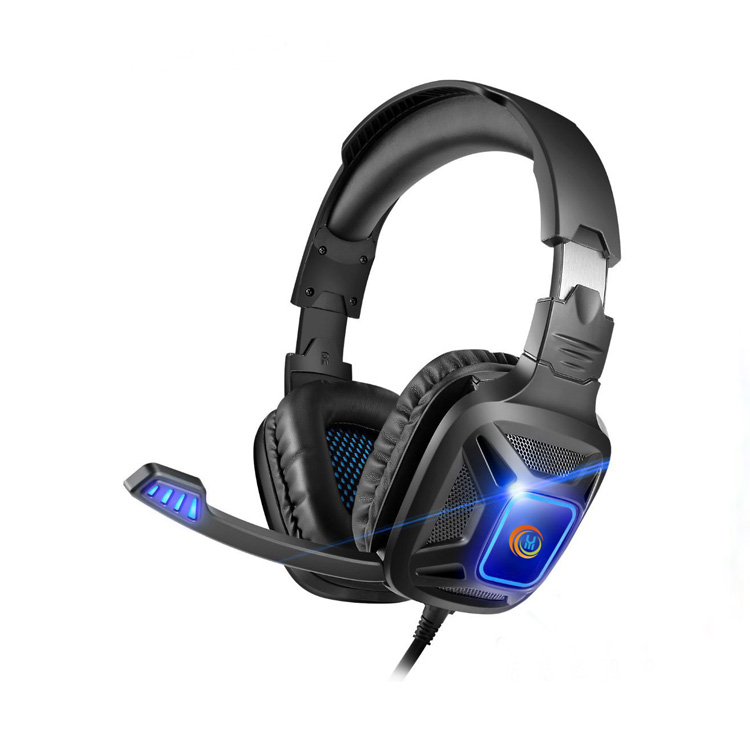 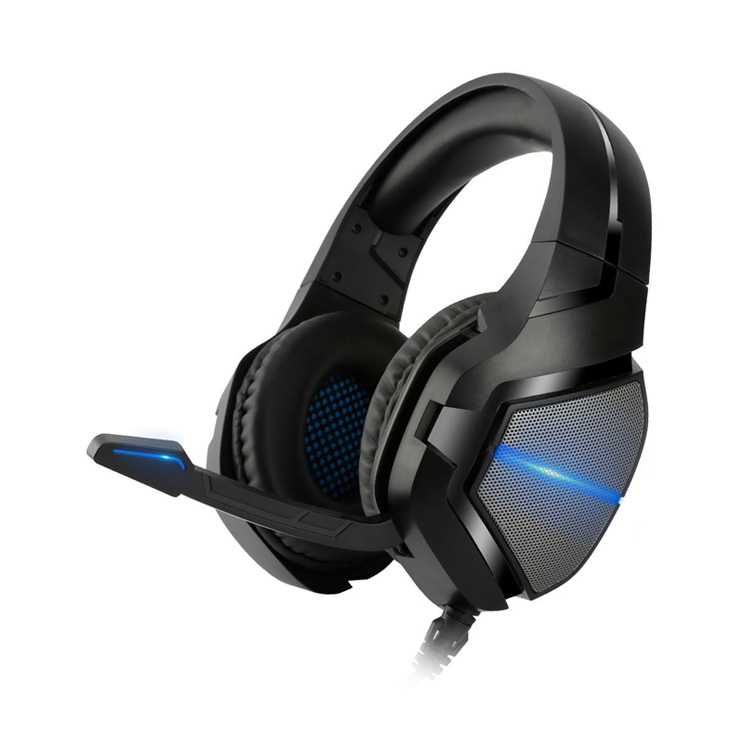 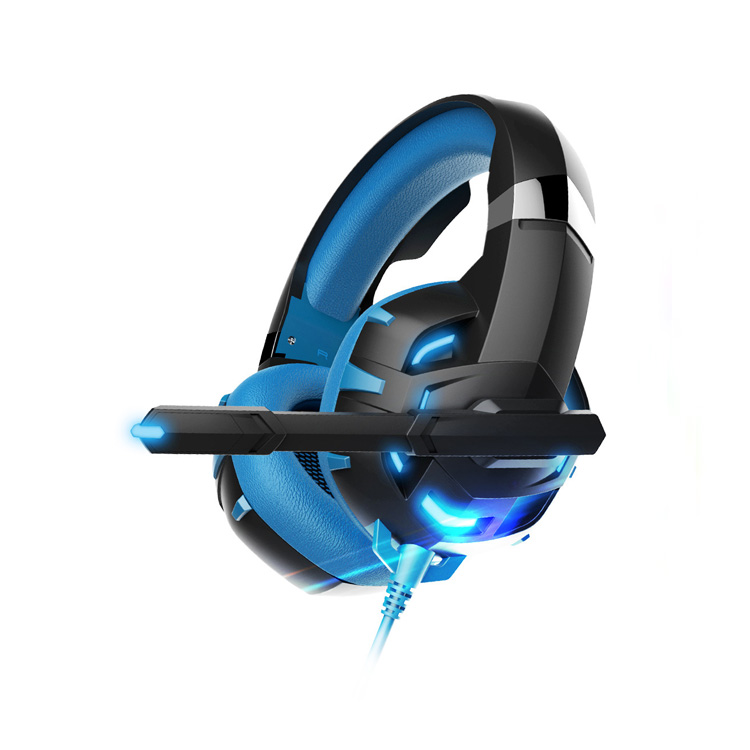 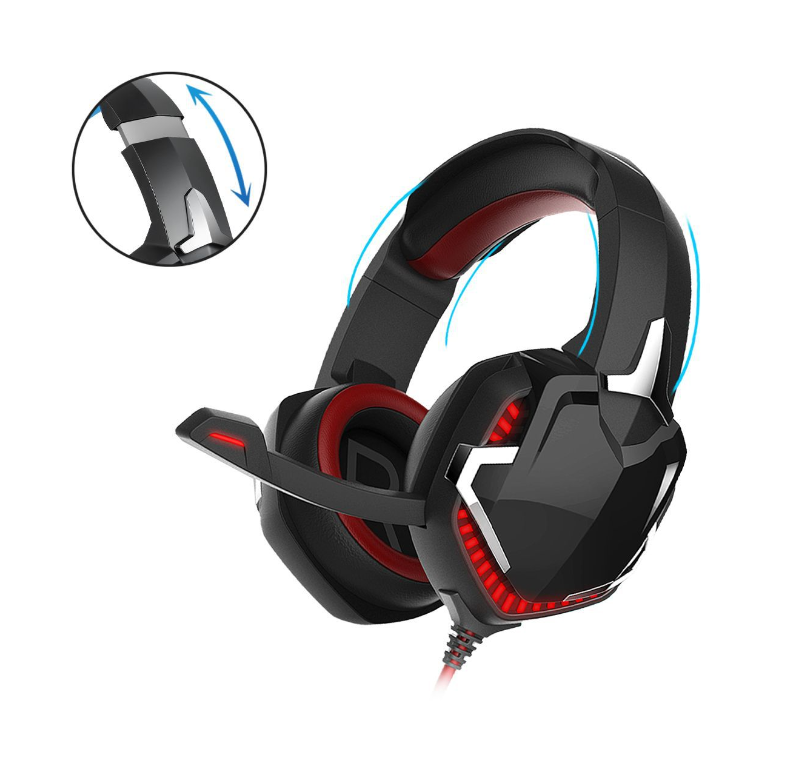 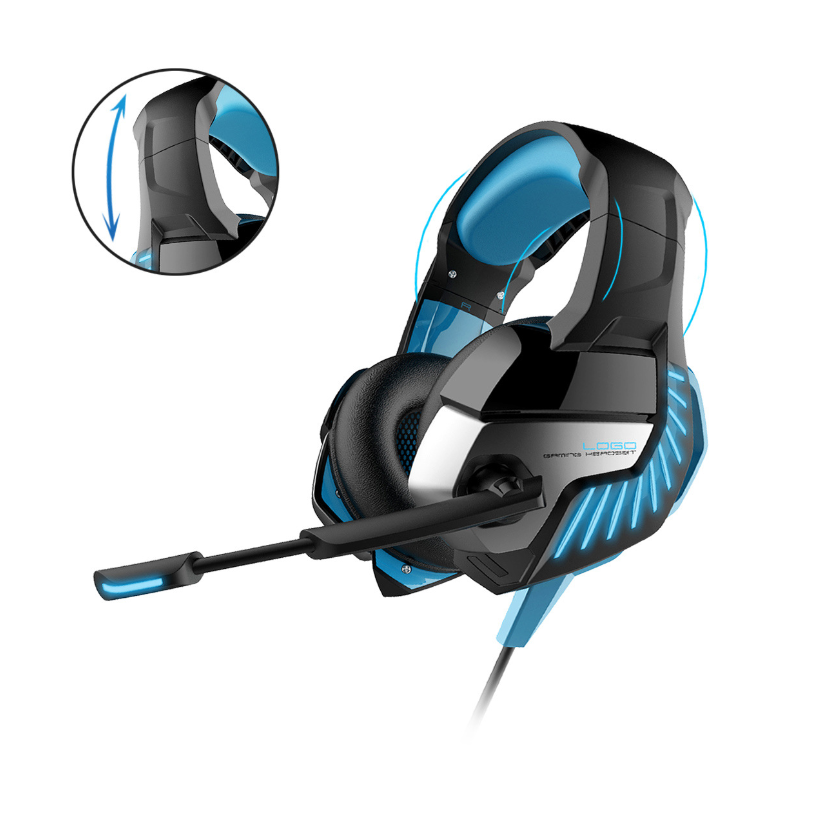 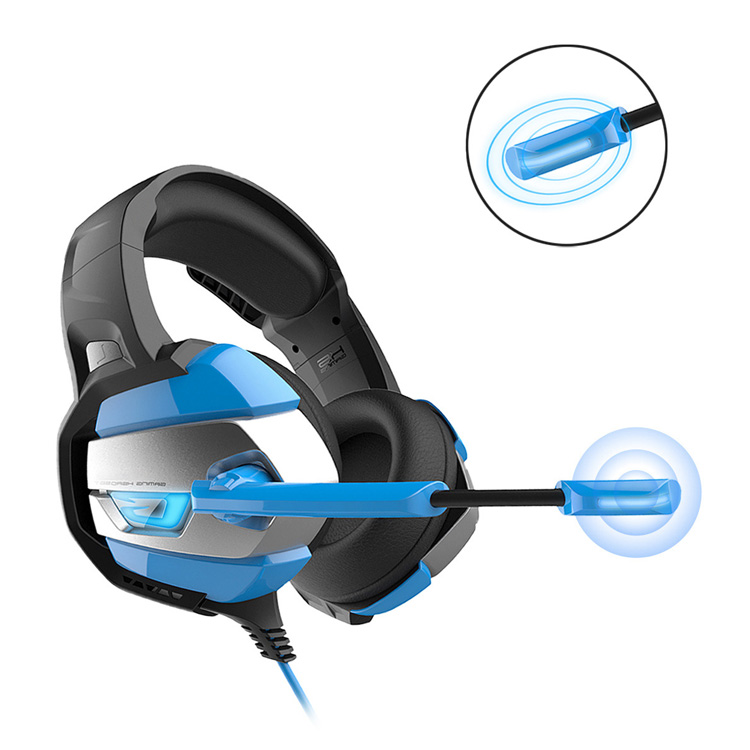 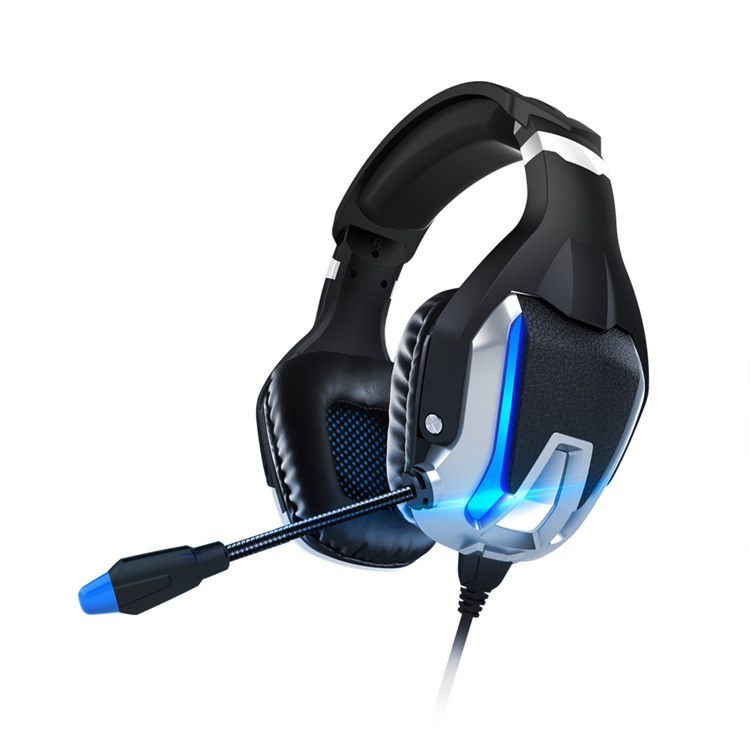